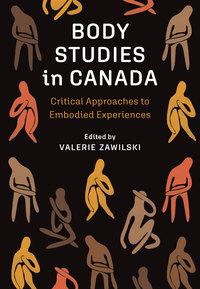 How do we perceive ourselves and our bodies in relation to our physical, geographical, social, cultural, political, psychological, and spiritual environments? Body Studies in Canada uses intersectional methodological and theoretical frameworks to discuss the political and socio-historical discourses that shape body studies in Canadian society.

This edited volume delves into a variety of timely topics including postcolonial “othering” of the body; social discourses around healthy and un-healthy bodies; intersections of aging, gender, race, class, and size; the fitness industries’ promotion of the “ideal” body; the gendering of bodywork symbols and expressions in carceral environments; and self-awareness of “the body” in social and digital media.

In thirteen chapters, editor Valerie Zawilski brings together scholars from a wide variety of disciplines and expertise to provide an interdisciplinary perspective on how the body interacts reflexively with society. This collection is a foundational text for sociology of the body and body studies courses, as well as gender studies, political science, and health studies.

Chapter 7: “It Was Such Good Medicine for Me”: Contesting the Body Project of Yoga, Health, and Ideal Femininity
Judith Mintz

Chapter 9: The Myth of Healthiness: Rethinking the Boundaries between Healthy Selves and Unhealthy Others in Drug Addiction Treatment
Ana M. Ning

Chapter 10: Power and the Body: Iranian Female Immigrants’ Perceptions and Experiences of Bodily Freedoms in Iran and Canada
Bahar Tajrobehkar

Chapter 12: Caged Bodies: Gendered Responses to the Carceral Challenges of Detention during the G20 Summit in Toronto, June 26–28, 2010
Valerie Zawilski